Ugly Females Will Do, If No Other Alternatives Available 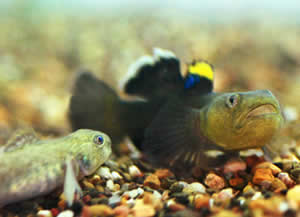 Scientists out at the Monasah University have stumbled onto an amazing discovery. It appears that male Australian desert goby fish are smart when it comes to getting in the sack. They tend to adapt their ways of thinking when females are scarce.

The goby fish devote an abundant amount of time, energy, and risk their lives looking for a mate. Previous studies have shown that the male gobies are more likely to court bigger females as they can carry more eggs than the smaller females.

However, our clever little goby fish knows when he is beat, and knows when to settle. A new study, recently published in the journal Behavioral Ecology and Sociobiology, shows that if the male goby finds himself with a lack of females in his area, he will go after any that he finds, regardless of how big they are.

Doctors Bob Wong, Topi Lehtonen and Andreas Svenson have expanded upon their previous studies by getting their hands on goby fish from Central Australia, and keeping their eyes on them, in controlled conditions of course.

Dr Bob Wong, who is a senior lecturer in the Science Faculty at the university, has commented that the study has indicated that when the male goby ran into more females, they were far more picky about who they mated with, and how much energy they would use in the attempt.

“By contrast, males will court females vigorously irrespective of her attractiveness if passing females are few and far between,” Dr Wong explained.

This just goes to show that the male goby “like big butts and they cannot lie”, but more importantly know when they are licked, and know that beggars cannot be choosers.