Native American tribes strive to save the lamprey

Lamprey used to be an important source of food for Native American tribes living along the northwestern coast of North America, and the fish was once upon a time harvested in ample amounts from rivers throughout the Columbia Basin, from Oregon to Canada. 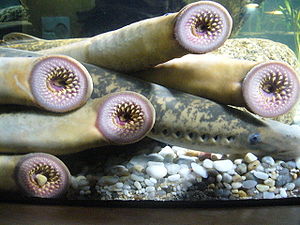 Today, the many hydroelectric dams built in these rivers have turned the fish from staple food to rarity. Nowadays, it is only harvested from one location – a 40-foot waterfall on the Willamette River between a power plant and a derelict paper mill. There are no dams between the waterfall and the sea, so the lampreys can still get here.

In July, Native Americans from the Umatilla, Warm Springs and Grande Ronde reservations in Oregon, the Yakama reservation in Washington and the Nez Perce reservation in Idaho who wish to continue eating this traditional food gather by the waterfall and manually pick the lampreys from rocks. The tribal elders will then prepare the fish for the community back at the reservations.

Aaron Jackson who heads the Confederated Tribes of the Umatilla Reservation says the Native American tribes of the Northwest have a special connection to the lamprey. According to legend, the seven gill slits on the side of lamprey’s head marked this fish as a food designated for the region’s tribes by the creator, corresponding to the seven drummers and seven songs of longhouse ceremonies.

While the salmon is receiving billions of dollars in government funds – money used for conservation efforts such as modifying dams and restoring prime salmon habitat – the lamprey is largely being ignored.

Lampreys hatch in freshwater and live in the rivers for many years before swimming downstream to the sea. In the sea, they attach themselves to fish and marine mammals such as whales and sea lions and feed on them. When the lampreys are old enough to breed, they return to the rivers where they die shortly after spawning.

Unfortunately, fish ladders and screens designed for salmon do not work well for the lamprey. Adult lampreys physically resemble eels and lack paired fins, and the species living in this part of the world grow to a length of roughly 2 feet. The fast water and sharp corners of fish ladders designed for salmon are very difficult to traverse for these elongated fishes. Also, young lampreys get stuck on the screens that are put up to keep young salmon safe from turbines.

In 2003, roughly 200,000 lampreys were crossing Bonneville Dam on the Columbia east of Portland. Now, the number has dropped to a mere 20,000 according to Bob Heinith, hydroelectric program coordinator for the Columbia River Inter-Tribal Fish Commission. Biologists estimate that in the 1970s, the number exceeded 1 million, but that was before accurate counts were taken so it is hard to know for sure what the situation looked like.

Aaron Jackson fears that the dams will lead to a complete eradication of lampreys in the region.

“That’s really sad, that something this old would just wink out in my lifetime — that’s unfathomable to me,” says Jackson.

The tribes are now driving the effort to save the lampreys, and one major hope is of course to improve the dam ladders and screens. Based on an agreement with the tribes, the U.S. Army Corps of Engineers is currently trying to make the ladders more suitable for lampreys without making them unsuitable for salmon. According to David Clugston, a biologist for the corps, this has proven to be quite difficult. So far, special ramps have been placed at Bonneville Dam and two fish ladders have been modified at other dams.

Simultaneously, the Native American tribes are capturing adult lamprey and releasing them in tributaries. If this experiment works out according to plan, the adult fish will re-establish lamprey populations in these tributaries. The tribes are also consulting experts in Finland on how to build hatcheries for lamprey.

Elmer Crow, who is a tribal elder and vice chairman of the Nez Perce Tribe’s fish and wildlife committee, says restoring lamprey is a vital part of restoring salmon.

“Life is a complete circle. Remember that,” he says. “If you take something out, a few others go with it.”