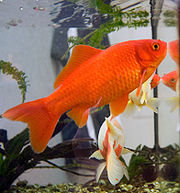 That’s right.. The new team which has been charged with looking out for the safety and wellbeing of the representatives of the G20 summit are six goldfish.

The people in charge at the Convention and Exhibition Center in Seoul, South Korea, have sworn in this “seal team” of fish to help keep tabs on the purity of the water in the bathrooms of the facility, in the hope that they will be able to sound the alarm if something is fishy.

Oh Su-Young, who heads up public relations for the venue, has told the AFP that the crack team of goldfish are being utilized as part of the process of inspecting the venue before the representatives arrive for the G20 summit, adding: “The fish also symbolize an eco-friendly water policy, which recycles used water for restrooms.” There was no mention made of exactly where this recycled water came from..

One of the people who will benefit from the efforts of these goldfish is British prime minister David Cameron when the summit takes place this 11th and 12th of November.

However, this is not the first time this year where animals have been trained and put to good use for the safety and wellbeing of our world leaders.

During the Commonwealth Games in Delhi, the police force of India scooped up monkeys and trained them to run regular patrols in the athlete’s village as well as the venues of the event.

These unlikely bouncers with long tails were meant to protect spectators and athletes alike, from the notorious Bonnet monkey, which supposedly holds a grudge against us humans.