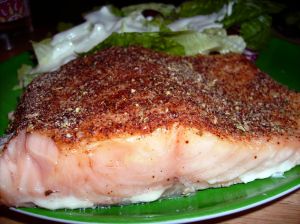 It appears that the traditional Turkey and local Salmon have been replaced with imported Brazilian birds and “chum salmon” imported from China. What is really a turn-off for these 5 GBP morsels – known as “Christmas Wild Salmon side with lemon and thyme butter” – is that many Inuit tribes have used this “chum salmon” to feed their dogs, as in not fit for human consumption.

The sudden appearance of “chum salmon” has really shocked shoppers.

You see, farmed salmon – primarily Scottish in origin in years past – has gotten quite pricey, and the chum is the cheaper alternative, being twenty to thirty percent more economical.

A traditional salmon side of 600 grams may run you 10 GBP to 12 GBP, however this “dog salmon” retails for around 5 GBP.

However, it is not just this “dog salmon” which has been hitting the shelves. Many retailers are also opting for foreign bred geese as well, which has the National Farmers’ Union in an uproar.

“There is concern about how much food is coming in from overseas for Christmas – particularly when it’s dressed up as a traditional product and can quite easily be misleading,” fumed head of the NFU’s food chain unit, Lee Woodger.
“British farmers pride themselves on the quality of the food they produce, both in terms of the environmental and welfare standards, and traceability.
“Consumers can only get a 100 per cent guarantee on where food is farmed, produced and packaged if they see the tractor logo with a Union Jack on the packaging.”

That being said, the cheaper alternatives are sure to be the norm this Christmas, what with the current economic crisis the world over.