Another case of animal cruelty against goldfish at a Chinese Gala 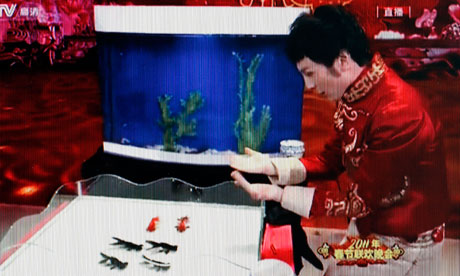 Yet another Chinese event is by many considered to be tainted with animal cruelty, and just as with the olympics, the unlucky animals are goldfish. at the opening gala of China’s lunar new year festival earlier this month they shower goldfish swimming in perfect military formations. The show put on by magician Fu Yandong was well received by the audience but have sparked outcry in animal activist circles as the only explanation to the trick according to them is magnets in the stomachs of the goldfish. The goldfish in in another word not so much swimming as being dragged. There are many factors supporting this hypothesis including the very shallow water the goldfish is swimming in. The shallow water would allow magnets to work which wouldn´t be possible in deeper water. Experts in the field agrees and think the fish might have been fed food with metal shavings on it.

Fu has denied the accusation of animal cruelty, telling one news programme: “If I used magnets, the fish would stick together.”  This is not necessarily true and a magician never reveal his trick even if discovered right?

Another theory that has been put forward is that it is fake fish but experts reject this idea in unison as the replicas would not meet the scrutiny of 100s of million of viewers.

A coalition of 53 groups sent a letter to Chinese broadcaster CCTV asking them to prevent magician Fu Yandong performing it again at the closing ceremony.