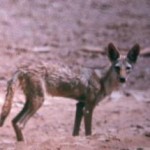 This is not really fish related but cool enough to warrant a post here anyway. Scientists have discovered a new species of Wolf in Egypt. A team a researchers from Oxford University’s Wildlife Conservation Research Unit (WildCRU), the University of Oslo, and Addis Ababa University, with funding from the University of Oslo, shows that Gray wolves reached Africa around 3 million years ago before spreading throughout the northern hemisphere. The new wolf is a relative of the Holarctic grey wolf, the Indian wolf and the Himalayan wolf.

The Egyptian jackal (Canis aureus lupaster) is an importan part of the Egyptian mythology and has until now been considered a subspecies of the Golden jackal (Canis aureus) but this new research show that the egyptian jackal is infact a species of wolf. This new species is not closely related to the rare Ethiopian wolves. Ethiopian wolves are a relatively recent of spring from the gray wolf complex while this new species, ”African wolf” (suggested name by Professor Sillero), likely arrived in Africa much earlier.

Professor David Macdonald says: “A wolf in Africa is not only important conservation news, but raises fascinating biological questions about how the new African wolf evolved and lived alongside not only the real golden jackals but also the vanishingly rare Ethiopian wolf, which is a very different species with which the new discovery should not be confused.” 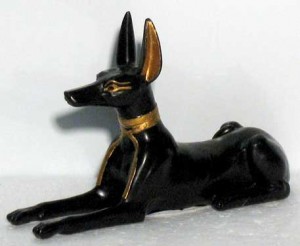 The jackal is important in Egyptian Mythology

The team also found genetically very similar specimens to this new wolf in the highlands of Ethiopia, 2,500 km from Egypt, suggesting that the new species might have a large distrobution and that it is not just found in Egypt.

The conservational status of this new species is not known.

Professor Sillero says: “It seems as if the Egyptian jackal is urgently set for a name-change, and its unique status as the only member of the grey wolf complex in Africa suggests that it should be re-named ‘the African wolf’.”

WildCRU is part of Oxford University’s Department of Zoology.

If you want to read the entire paper (direct link) you can do so at PlosOne: