The fish known to aquarists as Gold Nugget pleco (L18, L85, L177) is from now on officially named Baryancistrus xanthellus, while the pleco called Mango pleco (L47) has been given the scientific name Baryancistrus chrysolomus.

The species were described and named by Lúcia Py-Daniel, Jansen Zuanon and Renildo de Oliveira in a paper published in the most recent issue of the journal Neotropical Ichthyology (http://www.scielo.br/scielo.php?pid=1679-6225&script=sci_serial). 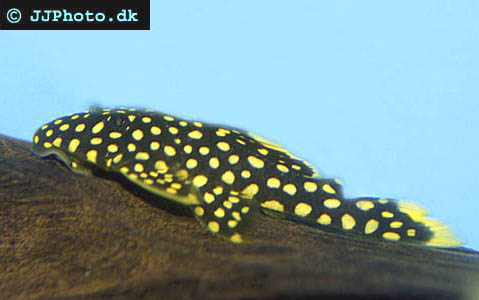 This is the pleco known to most aquarists as the Golden Nugget pleco, and it has been given three different L-numbers (L18, L85 and L177).

Baryancistrus xanthellus differs from other members of its genus by having a broad light band on the edges of the dorsal and caudal fin in juveniles, a band that turns into a small dot on the tips of these fins as the fish matures into an adult.

The authors found congregations of Baryancistrus xanthellus under flat rocks at the bottom in shallow parts of the Xingu River drainage where the water moved rapidly. They analyzed the stomach material and found out that it was chiefly algae.

This fish is known in the aquarium trade as Mango pleco and has the L-number L47. The scientific name, Baryancistrus chrysolomus, alludes to its yellow fin margins (chrysos and loma are the Greek words for yellow and border, respectively).

The scientists encountered Baryancistrus chrysolomus under rocks at the bottom of the river in stretches where the water flow was slow to moderate. The fish fed by scraping algae from the rocks.