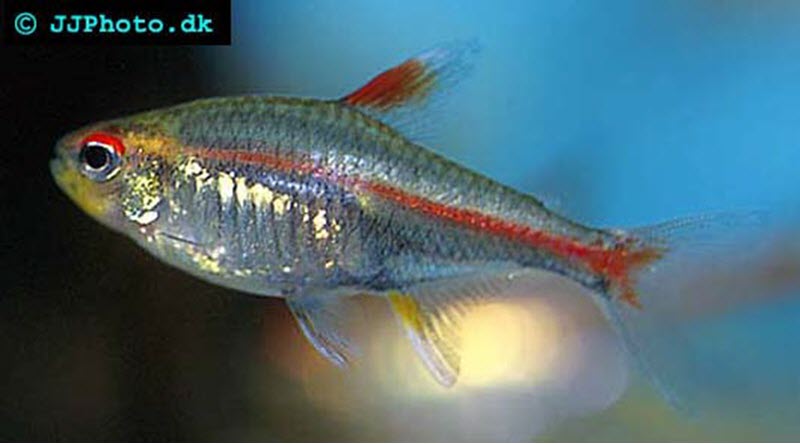 The Glowlight tetra is a benthopelagic species endemic to the tropical Essequibo River in Guyana, South America. The Essequibo River is the longest river in Guyana and runs from the Acarai Mountains (close to the Brazilian border) to the Atlantic Ocean. The surrounding habitat varies from mountainous to forest and savannah. The river contains a lot of rapids and waterfalls. In August 1995, the Canadian mining company Cambior released an estimated one billion gallons (almost 4 billion litres) of acid waste into the Essequibo River. The acid waste contained cyanide and caused severe destruction.

The maximum Glowlight tetra length is disputed. Some sources quote 3.3 centimetres (1.3 inches) while another claims to have scientifically measured a 4 centimetre (1.6 inches) long Glowlight tetra.

The Glowlight tetra has a silvery body colour and is decorated with a bright shimmering stripe that runs from the snout to the tail-base. The stripe colour varies from red to orange, and the same colour can be seen on the front part of the dorsal fins. The rest of the fins are transparent or silvery. Today, you can also purchase a golden Glowlight variation and an albino Glowlight variation from Glowlight tetra breeders.

The Glowlight tetra is a shoaling fish that should be kept with at least four other members of its own species. Keeping an even larger shoal is recommended, since this will make the Glowlight tetras feel much safer in the aquarium. They will also be more active and exhibit a much broader range of natural behaviours. It is common for this species to form smaller groups when there is a predator (or perceived predator) in the aquarium, and then proceed to swim more freely when they feel safe again. Glowlight tetras are mid-dwellers in the aquarium and will usually stay a few centimetres above the bottom. During feeding, they will quickly swim to the top of the water column since they are happy eaters. If you take good care of your Glowlight tetra, it can live for up to 2-4 years in captivity.

The recommended minimum aquarium size for Glowlight tetras is 60 cm (24 inches). It is possible to make Glowlight tetras survive in a 20 litre (5 gallons) aquarium if you perform very frequent water changes, but 50 litres (13 gallons) will be much better. Try to mimic the natural Glowlight tetra habitat when you set up the aquarium. Include a lot of plants, especially fine leaved ones, but save space for an open swimming area as well. The Glowlight tetras will look their best against a dark substrate and a well planted background; preferably combined with subdued aquarium lighting.

The Glowlight tetras will endure a pH between 6.0 and 8.0, but slightly acidic water is preferred. Ideally keep the pH near 6.8. A pH change to above 7.5 must be slow and gradual, and might still weaken the fish. The Glowlight tetra should be kept in soft or slightly hard water, preferably within the dH 5-12 range. The recommended water temperature is 24 – 28° C (75 – 82.5° F). If you want to breed Glowlight tetras, you should definitely keep them in soft and slightly acidic water. You can read more about breeding further down in this article.

Wild Glowlight tetras are omnivores that feed chiefly on plants, worms and small crustaceans. They should be kept on a varied diet in the aquarium. You can give them small live food such as brine shrimp, but they will also accept frozen and dry foods. Including vegetable matter, e.g. boiled zucchini is recommended.

The wild Glowlight tetras are highly prolific and have a minimum population doubling time below 15 months. It is an egg-scattering species that do not engage in parental care.

It can sometimes be hard to sex Glowlight tetras before the female becomes fully mature and starts to grow bulky from the eggs, but generally speaking the female will have a more plump body shape than the slender male.

The Glowlight tetras are considered moderately difficult to breed in captivity. Feeding them live food for several weeks can help coaxing them into spawning. If you want to ensure a high fry survival, setting up a separate breeding aquarium is a really good idea. You can use a 40 litre (10.5 gallons) aquarium that is decorated with plenty of fine-laved plants, such as Java moss. The breeding aquarium should have no lighting or weak subdued lighting.

The water temperature should be kept in the upper parts of the normal range; between 26 and 28° C (79 and 82.5° F). The water should be soft and slightly acidic. The dGH should be kept below 8° and the carbonate hardness must stay under 1°dCH. If you have trouble getting the water chemistry right, you can try adding some peat to the aquarium or to the filter, since this will make the water softer and more acidic.

Professional breeders usually keep the pair separated prior to spawning and place them together in the breeding aquarium during an afternoon when the female seem ready to release her eggs. During the actual spawning, the pair will turn upside down and the female Glowlight tetra will release her eggs. Glowlight tetras spawn over fine-leaved plants and up to 150 eggs or more can be released during one spawning. Some plants will fall on the leaves, while others will end up on the bottom of the aquarium. Placing glass beads, spawning grate or similar at the bottom can therefore be a good idea. Remove the adult fish from the breeding aquarium as soon as the spawning is over.

The fry will hatch after 20-25 hours. You can feed the fry paramecium culture, rotifers or infusoria. When they are four days old, you can start giving them newly hatched brine shrimp. As the fry grow bigger, you can give them larger brine shrimp and microworms.