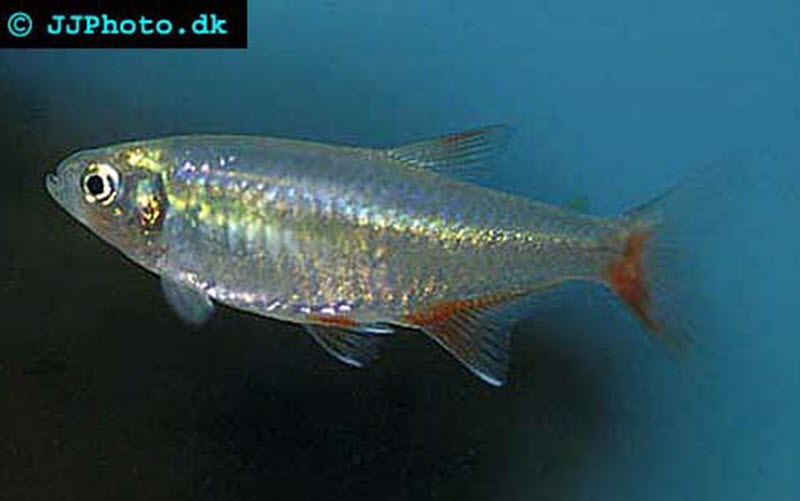 The Bloodfin tetra is a benthopelagic freshwater species native to the Río Paraná basin in South America. Río Paraná runs from Brazil via Paraguay to Argentina, before it empties into the Atlantic Ocean. This habitat is subtropical and the water temperature stays between 18 and 28° C (64.5 – 82.5° F).

The Bloodfin tetra is a shoaling fish and you should therefore keep at least five specimens together. When a Bloodfin tetra is kept alone, or in a very small group, it will usually become very shy and spend most of its time hiding. In a shoal, they are much more bold and active and spend a lot of time out in the open. A Bloodfin tetra can sometimes leave the group and explore the aquarium on its own, but it will always return to the safety of the group as soon as it feels threatened.

The Bloodfin tetra shoal will spend most of its time in the upper and middle water layers. In a shoal, the Bloodfin tetras are very active and entertaining to watch. Since this is a peaceful species, it will work well in a community aquarium with other non-aggressive species of similar size.

The recommended minimum aquarium size for Bloodfin tetras is 60 cm (24 inches). Try to mimic the natural Bloodfin tetra habitat when you arrange your tank and include a lot of plants. If you have no previous experience with planted aquariums, you can use sturdy plant species like Java fern. Java fern will thrive without any special light; standard aquarium light is enough. It will also help controlling excessive algae growth since it will compete for nutrients with the algae. Leave a large open area unplanted in the aquarium to give the active Bloodfin tetras some space to swim around in. Many aquarists used a blue background in the aquarium to bring out the colours of their Bloodfin tetras. Including broad leafed plants in the set up is recommended if you want your Bloodfin tetras to spawn.

Caring for Bloodfin tetras is not difficult, but just as with most other fish species, regular water changes must be carried out. The tolerated pH range is 6-8 and the dGH should be kept between 2 and 30. The water temperature can vary from 18 to 28° C (64.5 to 82.5° F), but you should never allow the temperature to shift rapidly between these two extremes. Since the Bloodfin tetra can endure such low temperatures, it is commonly found in unheated aquariums. Low temperatures can however cause its colouration to become less vibrant. If you take good care of your Bloodfin tetra it can live for 10 years or more in the aquarium.

Wild Bloodfin tetras are omnivore and feed chiefly on crustaceans, worms and small insects. Keep them on a varied diet in the aquarium that contains carnivore food as well as plant or vegetable matter. This species will usually accept flake food and a high quality tropical food is a good and convenient staple food. Supplement the flake food with other food types, such as live/fresh, frozen or freeze-dried products. Bloodfin tetras are known to appreciate brine shrimp and bloodworms. Since they are active they will need quite a lot of food, but you should never feed them more than what they can consume within 3 minutes.

Bloodfin tetras will often spawn spontaneously without any coaxing from the aquarist. Their natural instinct is to release the eggs among broad-leaved plants, but if no such plants are present they will sometimes release the eggs over aquarium glass. The eggs are not adhesive.
During the spawning, the Bloodfin tetra will leap out of the water and the eggs will drop down. One female will usually produce between 300 and 500 eggs during each spawning.

Since it is an egg-shattering species that do not engage in parental care, it will not hesitate to eat its own offspring. A lot of eggs and fry will therefore be eaten by the parents, or by other fish in the aquarium. You can increase the chance of fry survival by keeping the aquarium densely planted. Do not only use broad leafed plants in your Bloodfin tetra aquarium; include fine-leaved species as well since they provide better protection. You can also spread beads over the substrate to create hiding spots for eggs and fry. Professional Bloodfin tetra breeders usually set up separate breeding aquariums from which the adult fish is removed directly after spawning. This will promote a much higher fry survival rate.