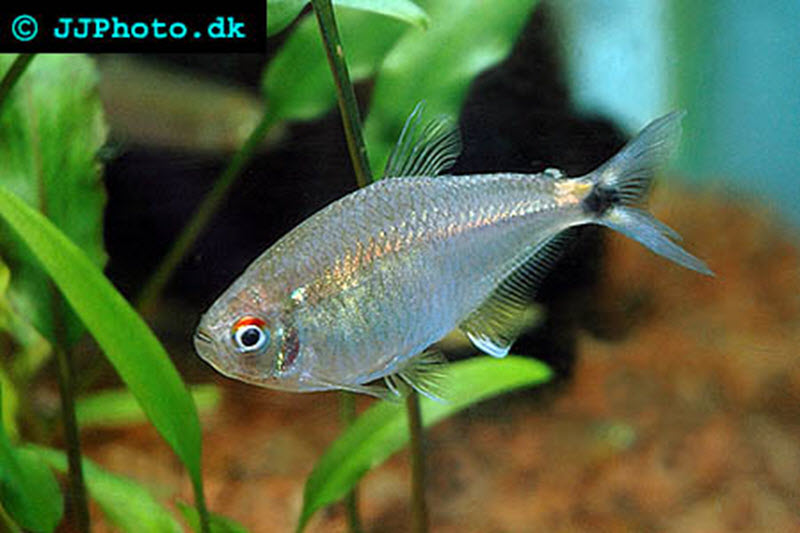 Astyanax bimaculatus is a characin native to South and Central America. It is also known as the Twospot Astyanax and is still comparatively uncommon among aquarists. The name Twospot Astyanax is derived from the two black spots found on this fish. One is located at the shoulder and one is found at the caudal peduncle.

Astyanax bimaculatus lives in South and Central America, from the Amazon basin to Panama. It lives in a rich assortment of different habitats, from clear rivers to drainage ditches. You can for instance find this fish in small streams and ponds. If you want to keep Astyanax bimaculatus you should keep it in an aquarium where the water temperature is subtropical, from 20 to 28°C. The water should ideally be acidic, but this species will tolerate a pH-value up to 7.5. Keeping the pH-value between 5.5 and 7.0 is however recommended. The water hardiness should be kept below dH 25.

Wild Astyanax bimaculatus normally stay below 15 cm in length. Astyanax bimaculatus is silvery grey, but some specimens display a red shade on the fins. They feed on zooplankton, plant matter and detritus. They can also feed on the scales of fish so you should keep them under supervision in your aquarium.

To begin with, you need a group of healthy Astyanax bimaculatus. Keeping more than one male seems to induce spawning in this species. A two females – two males ratio has proven successful in the past, but more research is needed before we know if it this is the ideal ratio. Mature females normally have a plump appearance compared to the leaner males.

A 50 gallon aquarium is enough if you are prepared to do some heavy culling. If you want to raise as many fry as possible, the aquarium need to be 250 gallons or larger. You can also use several small containers as fry aquariums. Decorate the aquarium with plenty of plants. You can for instance use Java moss.

If your fishes are reluctant to breed, you can try making the water much softer than normal. The heavy rains of the rainy season make the water soft, and this can therefore work as a trigger for Astyanax bimaculatus.

When the male fish gets darker, it is a clear sign of imminent spawning. He can also start to chase the females around in the aquarium.

The female Astyanax bimaculatus can produce several thousands eggs during one spawning. The eggs are really small and will be scattered around the aquarium. They hatch within 24 hours (depending on water temperature). After 1.5 day, most fry will be free swimming.

As mentioned earlier, a breeding Astyanax bimaculatus produces a lot of fry and culling is therefore common. You can also let nature take its course and leave the stronger fry to feed on the smaller ones. They should however be given liquid fry food and micro worms to begin with, since they are too small to feed on each when newly hatched. Frequent water changes and potent aeration is necessary to keep the water quality up. If provided with nutritious food and a suitable environment, Astyanax bimaculatus fry can reach a length of 2 inches within 5 weeks.