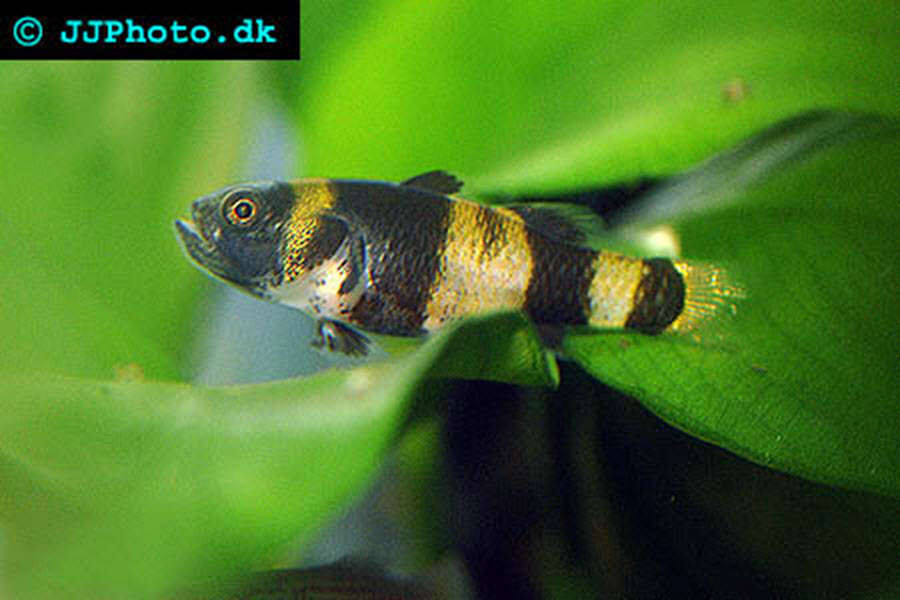 Behaviour and Compatibility
This is a small species that is best kept in a small aquarium. It is harder to keep and breed in larger tanks. It can be kept with other friendly species that has the same requirement as the Bumblebee Goby. Do not keep with larger species.

Several different species from the genus Brachygobius are commonly referred to as Bumbleebe Gobies, and in this article I will focus on the species known as Brachygobius nunus. Bumblebee gobies are called bumblebees due to their round appearance, their big heads and the fact that they display four brown to black vertical stripes over a yellow to golden background. They are also known to “buzz” from one surface to another inside the aquarium. Being true gobies, the ventral fins of these fishes have fused into a suction cup that they use to attach themselves to virtually any surface, including aquarium glass.

If you plan on breeding Brachygobius nunus, it can be a good idea to house your fish in a small aquarium. Nobody really knows why, but many aquarists have been more successful breeding Bumblebee Gobies in small aquariums than in big ones. Placing a dozen juveniles in a 10 gallon aquarium is a good way of obtaining matching pairs. The aquarium should be well decorated and include suitable “caves”, e.g. snail shells and barnacle shells.

As mentioned above, Brachygobius nunus might survive in fresh water but it is far from ideal for it. Adding at least two teaspoons of sea salt mix per gallon of water is much better. Increasing the salinity from 2 tsp/gallon up to 1 tbsp/gallon seems to induce breeding. Large and frequent water changes are also recommended if you want to coax your fish into breeding.

A hungry Brachygobius nunus might eat flake food, but keeping it on a diet of solely prepared foods is not recommended. Live or frozen brine shrimp, daphnia and whiteworms are all suitable choices. The diet should be varied, and if you want your Bumblebee gobies to breed you should not rely on frozen stuff – spoil them with live food as much as possible.

As the breeding period commences, the males will change into breeding colors. Their dark vertical stripes will almost vanish completely and their golden yellow coloration will be more vivid than ever. They can also be seen swimming around freely more like “normal” fish instead of buzzing from surface to surface. The females will not change their colors, but their dark stripes can grow more pronounced and the eggs will turn their bellies very round.

The male Brachygobius nunus will swim in and out of the cave of his choice and try to make a ripe female enter it. If she is ready, she will swim inside and deposit a patch of eggs that will be promptly fertilized by the male. Theeggs will stay attached to the roof and sides of the cave until the fry emerge. The male will stay close to the eggs until the hatch, and as soon as he notices any intruders he will leave the cave to chase them away.

Newly emerged Brachygobius nunus fry are tiny transparent slivers with eyes, but if you look closely you will already be able to see a distinct spot in the midsection of the body. It is recommended to catch them and move them to their own fry rearing aquarium, or remove all the adult fish from the parent aquarium, because the male will no longer guard them.

A 5 gallon aquarium is big enough to serve as a fry rearing tank. Use water from the parent aquarium and install a sponge filter to help you keep the water quality up. It is important to keep a stable salinity in the fry aquarium since it is hard for young Bumblebee fry to adapt to rapid changes. Keeping the water quality up is also of imperative importance and small and frequent water changes is a must.

Really small fry can be fed liquid fry food and vinegar eels. Within a few days, the fry will be big enough to devour newly hatched brine shrimp.

After a few weeks, Brachygobius nunus fry will start showing dark striping and be developed enough to attach themselves to surfaces using their fused ventral fins. They will gradually spend less and less time swimming around freely in the aquarium and more and more time staying attached to various surfaces. After approximately two months the fry will have turned into miniature replicas of their parents.

Didn't find the info you were looking for? Register for free and ask your question in our Aquarium forum !
Our knowledgeable staff usually responds to any question within 24 hours