The Percula Clownfish (Amphiprion percula) is one of 27 known species of Anemonefish. The Percula Clownfish belongs to the family Pomacentridae, a family which also includes damselfish. Clownfish and Damselfish are the only known fish species that can stay clear of predators by hiding close to an anemone. Exactly how these fishes manage to avoid being stung by the anemone is still not known and several plausible theories are currently being investigated. 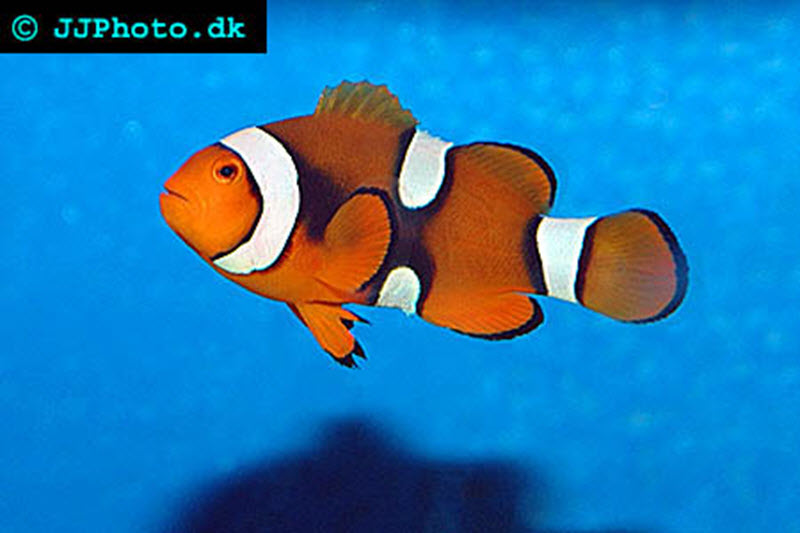 Wild Clownfish can be found in warm waters in the Pacific Ocean and the Percula Clownfish is a popular fish in salt water aquariums. They look very beautiful with striking colours and are also quite peaceful. They usually adapt quickly to a new environment and are easy to feed in captivity. Since they are found in warm waters their metabolism is higher than the cold water marine species. This makes the Percula Clownfish, -and its relatives – very active and lively in an aquarium compared to cold water fish.

Percula Clownfish and all the other Clownfish species experienced a boom in 2003 when Pixar released an animated movie called ‘Finding Nemo’. In this film, a Clownfish father tries to rescue his young son from an aquarium. Strangely enough, this film did not make people turn their back on fish keeping. Instead, the demand for Clownfish rose greatly after the movie had become a success. Unfortunately for the Clownfish, many buyers did not take the time to research how to successfully keep a Clownfish. Having a salt water aquarium is very much different from keeping a fresh water one. If you plan to keep a Clownfish, or any other salt water species, you must sit down and learn the basics about salt water aquariums and also be prepared to invest in the necessary equipment. If you want to keep a “Nemo” we suggest that you buy one that has been bred in an aquarium instead of being caught at a reef. As of 2005, Clownfish is one of the few marine aquarium species that are commercially bred in captivity. In the film, Nemo escapes back to the wild by being flushed down a toilet. Unfortunately, some fish keepers still use this as a method of getting rid of unwanted fish. This is a very bad method, since the fish will not survive but instead die a stressful death.

Without a shielding anemone, a Percula Clownfish will be rapidly consumed by predators in the ocean since the fish’s colouration offers no protection at all. The Percula Clownfish displays a vivid orange colour and is decorated with three distinctive white bars. The fins have dark black markings. A Percula Clownfish can reach a length of 8 centimetres.

Wild Percula Clownfish are capable of breeding all year long. They live in small groups that consist of one breeding pair and up to four other individuals that do not breed. We still do not know why the non-breeding individuals choose to stay with the breeding pair. One recent theory is that they are waiting in line for an opportunity to take over the anemone claimed by the breeding couple. They are certainly not hanging around for a chance to secretly breed, because their gonads are not activated. Since the fry survival rate is not affected by their presence, they are probably not helpers at the nest either.

Percula clownfish – Amphiprion percula.
Copyright www.jjphoto.dk
The Percula Clownfish group has a strict hierarchy. The biggest fish is the breeding female, the second biggest fish is the breeding male and the rest of the group is made up by smaller fish. The smallest fish is always at the bottom of the hierarchy. One very interesting feature is the Percula Clownfish’s ability to change sex. If the female dies, the male will turn into a female and the largest non-breeder will turn into a breeding male – even if that fish used to be a female.