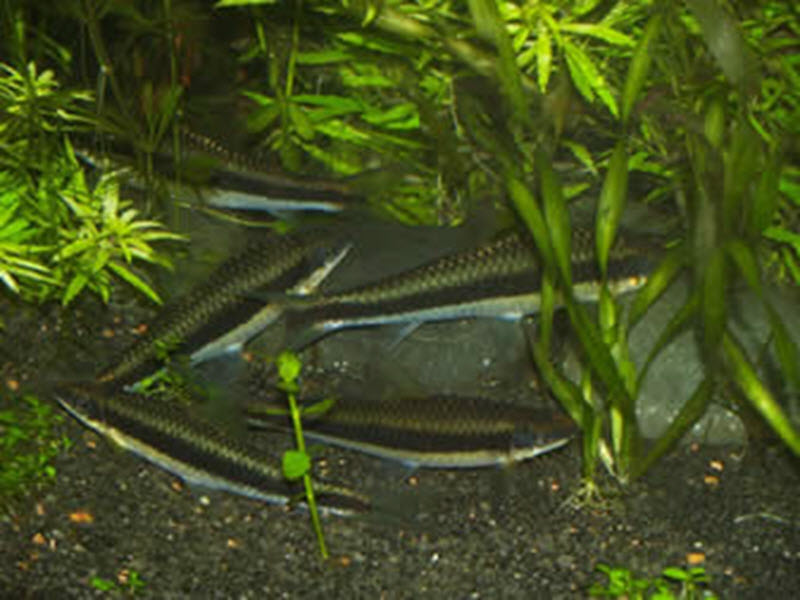 The Siamese algae eater is native to Thailand and the Malay Peninsula. It is the only know species to eat red algae and can be a good ally to have when fighting a number of nasty algae such as red algae and brush algae.

Siamese algae eaters need to swim to float. If they stop they sink to the bottom.

The Siamese algae eater is a hardy fish that can adapt to a wide variety of living conditions as long as extremes are avoided, but they do best in planted aquariums with densely planted areas as well as open areas. Siamese algae eaters wants to have at least a few broad leafed plants in the aquarium since they like to rest on top of such leafs. Young specimens also use narrow leaves for this. If not provided with suitable plants they rest on the bottom. Adult fish are more prone to rest on the bottom even if suitable plants are available.

Siamese algae eaters leave most plants alone but might eat Duckweed (Lemna minor) and the roots of the water hyacinth. They are best kept in schools. True Siamese algae eaters are peaceful and can be kept in community tanks with most other friendly fish. Avoid keeping them with long finned fish as they might bite the fins on long finned fish. The aquarium should be at least 25 gallon / 100 L.

Siamese algae eaters accept a wide variety of water conditions but neutral to slightly acidic water is preferred even if they tolerate pH 5.5-8.0. The recommended temperature is between 75 and 79˚F /  24 and 26˚C. Don’t keep this species in very hard water. They prefer well circulated clean water. It is recommended to oxygenate the water as they like oxygen rich water.

This species is as earlier mentioned a good algae eater, but in most aquariums they will need other food as well as there simply isn’t enough algae to sustain a school of Siamese algae eaters. They willingly accept all types of live, frozen and flake food. Feed them a varied diet with a lot of vegetable matter. If given too little green food in the aquarium they might hurt the plants. Young specimens are better algae eaters while older specimens seem to like other food more.

Siamese algae eaters are hard to sex but females are fatter than males and look more rounded when viewed from above. No other differences are known. Nothing is known about breeding this species in aquariums without the aid of hormones. It is reasonable to assume that changes in the water (temperature, pH, hardness) and current conditions might trigger spawning in well conditioned fish.