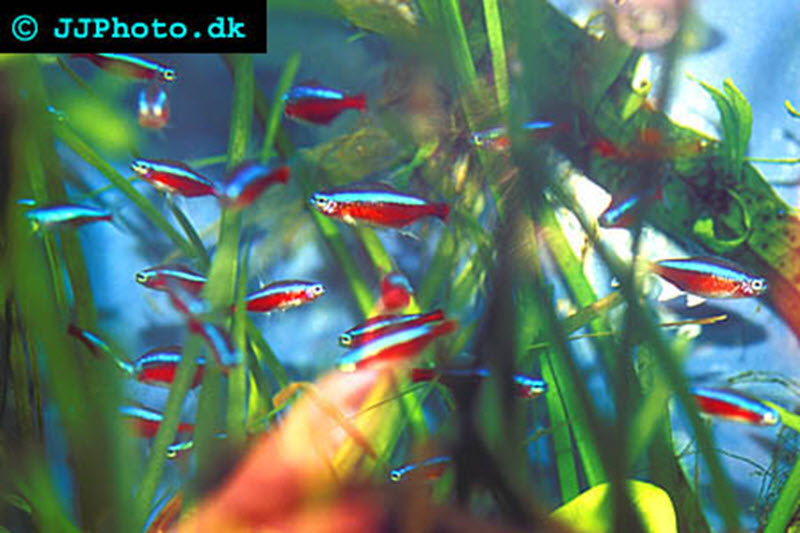 The wild Cardinal tetras live in the upper Orinoco and Negro rivers and are native to Colombia, Brazil and Venezuela on the South American continent. The Cardinal tetra spends most of its time in the middle water layer.

When you set up an aquarium for Cardinal tetras it is always a good idea to include a lot of plants. An open area for swimming is also recommended. Floating plants that dim the light a bit will make your Cardinal tetras spend more time out in the open. Cardinal tetras should always be kept in groups consisting of at least five Cardinal tetras. Larger shoals are recommended, so if you have place for 10 Cardinal tetras or more you should definitely go for the higher number. Keeping only a few Cardinal tetras will result in shy and stressed fish. Cardinal tetras are non-aggressive and commonly kept in community aquariums with other peaceful tropical fish species of similar size. The Cardinal tetra is a good choice if you are looking for fish that will occupy the top and mid part of the aquarium. 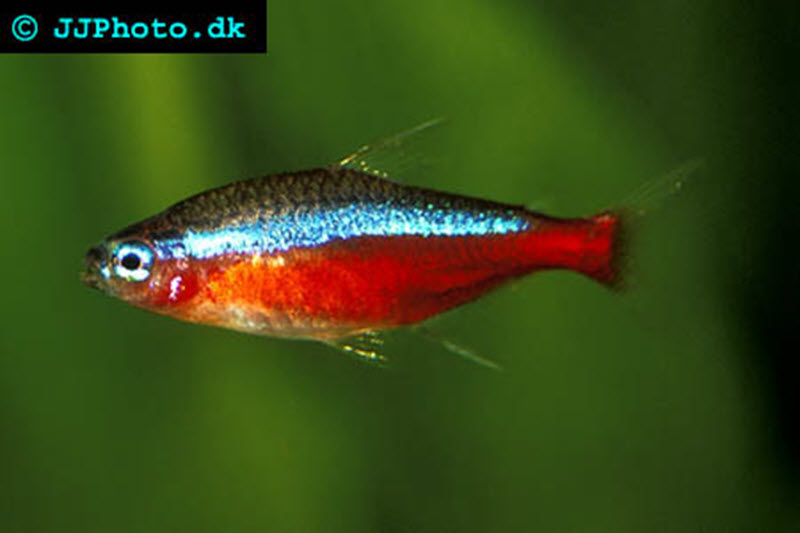 When it comes to water chemistry, you should try to make the conditions in the aquarium similar to Rio Orinoco and Rio Negro. These South American rivers are renowned for their extremely soft and acidic water. The pH in the aquarium should therefore ideally be kept between 4.0 and 6.0. It is possible to gradually adapt Cardinal tetras to harder conditions and even alkaline water, but living in such an aquarium will make the Cardinal tetra more sensitive and less resilient towards illness. The water temperature should between in the 23 – 27° C (73.5 – 80.5° F) range. You can adapt the Cardinal tetra to a slightly higher temperature without weakening it if you allow the transition to be slow and gradual.

Wild Cardinal tetras feed on small crustaceans and worm. They will usually accept most types of food in the aquarium and display a healthy appetite. You can for instance use a high-quality tropical flake food as a base and also include small worms in their diet. A varied diet will decrease the risk of malnutrition.

If you want to try breeding Cardinal tetras you must provide them with ideal water conditions. Switch from flake food to plenty of live food and include fine leaved plants in the aquarium set up. The Cardinal tetra is a non-guarding open water/substratum egg scatterer that will prefer to deposit the eggs among plants. Over 500 eggs can be released in one spawning. The eggs will hatch after 24-30 hours and it will then take an additional 3-4 days before the fry are free-swimming. Really small fry-food is necessary since the miniscule Cardinal tetra fry can not handle large food types.

The fry are very sensitive to poor water conditions and you can expect very high death rates if you do not keep the water quality at supreme levels. Another threat is the adult fish. Since Cardinal tetras are non-guarders, they will not hesitate to eat eggs and fry. If you want to breed Cardinal tetras it can therefore be a good idea to set up a separate fry rearing aquarium.