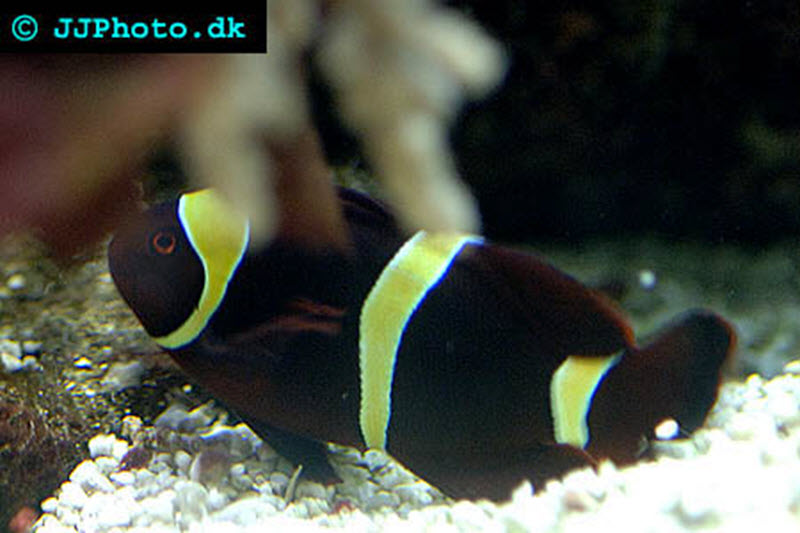 The Maroon clownfish is one of the biggest and most beautiful of the clownfish species that are commonly kept. It has a maroon red body with thee narrow white vertical stripes. There is a type of maroon clownfish with gold stripes instead of white that originates from Malaysia and can be found in the trade every now and then. The regular maroon clownfish originates from an area stretching from the Indo-Malayan Archipelago to northern Queensland.

Maroon clownfish is breed commercial but tank raised specimens of this species can often be harder to find than for many other clownfish species. If possible I recommend getting tank bred fish as they are hardier.

The maroon clownfish should be kept in an aquarium no smaller than 30 gallon / 120 L. A larger aquarium is recommended if you want to keep a group of them as they as earlier mentioned can be very aggressive towards other clownfish. The aquarium should be decorated with a lot of hiding places. They are reef safe and will do best in reef aquariums with a lot of live rock with a healthy algae growth. They can however be kept in “fish only” and “fish with live rock” tanks as well.

The Maroon clownfish does well without anemone in the tank and will even breed without it.  If you want to provide them with host anemones and be able to see them dart in and out of the anemones you should provide them with anemones from some of the following species: Entacmaea quadricolor, Macrodactyla doreensis, Cryptodendrum adhaesivum or Heteractis malu. In the wild, Maroon clownfish are most commonly found in Entacmaea quadricolor and if you want to give them the anemone they prefer this is the one to get. Entacmaea quadricolor does however have a high light requirement and might not be right for all tanks.

The Maroon clownfish is just like most other clownfish easy to feed and will accept most foods including marine flake food. Some wild caught specimens might reject flake food. Give your fish a varied diet consisting of both vegetable and meatier foods. A good diet might be built around a high quality vitamin enriched flake food that is complemented with different types of small frozen foods such as Cyclops, plus vegetable matter. Feed them 2-3 times a day.

Maroon clownfish are easy to breed if you have a compatible pair. The best way to get a pair is to let juveniles grow up together in a large aquarium or buy an established breeding pair. Maroon clownfish are generally easier to sex than other clownfish species as the males are smaller and redder than the females. You will also see a difference in behavior – females are much more aggressive. Males can change sex if there are no females present; the largest male will turn into a female. This means that you only need to buy two fishes to get a pair. They lay their eggs on a flat surface. They are good parents and will forcefully defend their eggs and fry.  The fry are small and quite sensitive. Read our guide to breeding clownfish if you want to learn more about how to breed them.