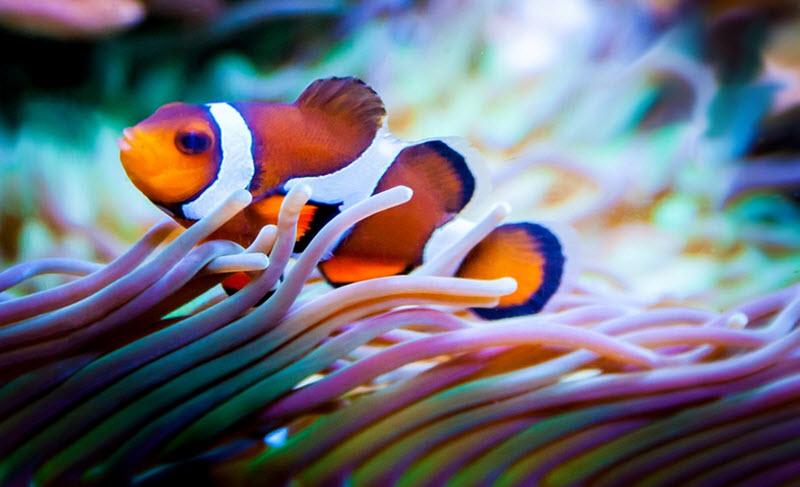 The Ocellaris clownfish is the perfect beginner fish. It is very hardy, not too aggressive and altogether an easy species to care for.  It does well without anemones which are harder to keep than the tolerant Ocellaris clownfish and that should only be kept if their high light requirements can be met. A beginner to saltwater aquariums does best in keeping this species in a “fish only” or a “fish with live rock” aquarium.

This is the fish that most people mean when they say clownfish – the fish featured in the animated film “Finding Nemo”. It has an orange base color with three white vertical stripes on its body and black tips on the fins. A beautiful black color morph of this species also exists.

Captive bred specimens are commonly available in the trade and are to be preferred over wild caught specimens, especially by beginners who should never by wild-caught clownfish. The reason for this is that tank bred Ocellaris clownfish are hardier and easier to care for. Another reason is the fact that the harvesting of clownfish for the pet trade is threatening many local populations of clownfish due to the popularity this fish got after the movie “Finding Nemo”. The number of collected fish sharply increased as the demand for the fish increased and in some areas, the populations could not sustain the harvesting and these populations are today endangered. Many of the collected fish died in the hands of beginner marine aquarists and those beginners could have had a much better experience if they bought hardier tank breed specimens that might have survived in their tanks. By not buying wild caught specimen you can help ease the strain on the wild populations.

The Ocellaris clownfish can be kept with most saltwater species that are not too aggressive and that aren’t large enough to eat the clownfish. Avoid keeping them with other clownfish species. This species should as all clownfish species not be housed with small shrimps as they will consider the shrimp food.

The aquarium should be decorated with a lot of caves and crannies where the fish can hide if it feels threatened. This is especially important if they are kept without an anemone. Beginners who keep this species should ideally keep it in a “fish only” or a “fish with live rock” aquarium. The later is to be preferred. The species is reef safe and do very well in reef aquariums. They do as earlier mentioned not need anemones, and you should not keep anemones unless you have the right conditions for anemones. If you want to keep your Ocellaris clownfish with host anemones you should pick one of the following species:
Entacmaea quadricolor
Heteractis magnifica
Stichodactyla gigantea
Stichodactyla haddoni

This species is easy to feed just like most other clownfish. The Ocellaris clownfish is an omnivore and will accept most foods including marine flake food. They should be provided with a varied diet containing both algae and other vegetable matter and meaty food. A good diet can be based around a good high-quality marine flake food that is complemented with different types of frozen and live food. They like if there are algae in the aquarium on which they can grace when hungry between feedings. Feed them 3-4 times a day if possible.

Breeding Ocellaris clownfish is easy (for a saltwater fish) and can be done without the presence of an anemone in the aquarium. Sexing Ocellaris clownfish can be done by the fact that males are smaller and less aggressive than females. All clownfish are born as males. When they pair the dominant fish in the pair turns into a female. The eggs are laid on a flat surface such as a rock. The fry is small and more sensitive than the adult fish. They need very small food and should be fed every two-three hours. To find out more about how to breed this species as well as other clownfish species you can read our article about clownfish breeding.