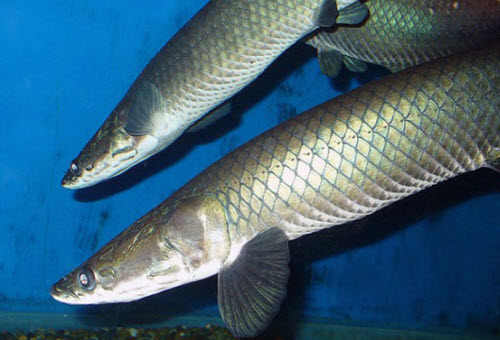 A new species of arapaima, Arapaima leptosoma, has been described by Dr. Donald Stewart of the SUNY College of Environmental Science and Forestry (ESF) at Syracuse University. The new species has been described from specimen that were collected in 2001 near the confluence of the Solimões and Purus rivers in Amazonas State, Brazil. Stewarts discovery brings the total number of Arapaima species up to five . 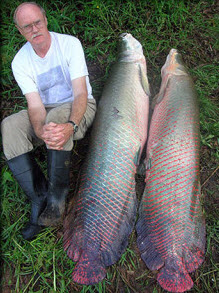 Four species of Arapaima were recognized in the mid-1800s, but in 1868, Albert Günther, a scientist at the British Museum of Natural History, published that those were all one species, Arapaima gigas. Over time, Günther’s view became the prevailing wisdom. Stewart did however look into these four species and it turns out that all four species are distinct different species.

Stewart believes that their might be more species of Arapaima out there. The fish is an appreciated food fish and has become increasingly rare. This combined with the fish large size means that there are few reference specimens out there which makes it easy to overlook a species or two. Stewart made his discovery when he examined preserved arapaima at the Instituto Nacional de Pesquisas da Amazônia in Manaus, Brazil.

The new species differ from the other species in several ways including the shape of sensory cavities on the head, a sheath that covers part of the dorsal fin and a distinctive color pattern. Its scientific name, A. leptosoma, is in reference to its slender body.

The wild populations of Arapaima is very low in many areas as a result of overfishing. Overfishing of Arapaima has been a problem for almost a century and conservation efforts as well as aquaculture of the fish is likely necessary to save these once common species. The conservation effort will however not be as effective as we might want it to be until all species has been identified.

The new species is most likely already cultured and exported into the aquarium trade but under the name Arapaima gigas. It can be mentioned that the new species already is on display in Europe in the Sevastopol Aquarium, Ukraine. The species has been on display there for a long time as A. gigas but is according to Stewart in fact Arapaima leptosoma.