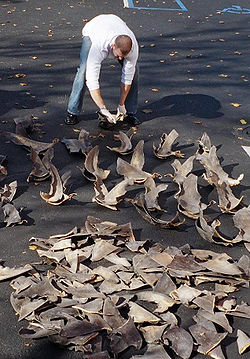 A brazilian nonprofit Organization, known as The Environmental Justice Institute which happens to be located in Porto Alegre, has just initiated its fourth lawsuit against the industry of illegal shark finning. This time the trial will be held at the Federal Court in Belem, which is the capital of the Amazonian State of Para.

The case has already seen the confiscation of three and a half tons of shark fins, which amounts to a staggering number of some 40,000 sharks. The Environmental Justice Institute is asking for $120,000,000 in damages, and that is just the start.

“Usually, when people talk of the Amazon, they only think about the forests. Belém do Pará however is one of the main hotspots of finning in Latin America. We know also that the killing of dolphins for shark bait is commonplace in the region, and this too is an unacceptable crime”, explains Director of IJA, Crstiano Pacheco.

This fourth lawsuit is following two other lawsuits started in the Federal Court of Rio Grande, and another one in Belem, which is asking for the princely sum of $900,000,000 from SIGEL do Brasil, one of the biggest players in the fishing industry in the area. While they are based out of Panama, they do have a local office in Brazil, and that is where the case is being based from.

It is a long road for those involved in the case, but with the worldwide ban on shark finning, the plaintiffs are confident they can strike a blow for the sharks, and keep their fins firmly planted on their backs, where they belong.