I recently visited a friend who makes his living as a day trader and who had earned a small fortune taking short positions while margin trading CFD positions. Don’t worry if you didn’t understand a word of that, I didn’t either until he told me to read this website. He invited me to see his new fish that he purchased to celebrate his recent fortune, 1 Red Arowana and a Platinum gar!!! I am so jealous of this guy right now.

We spent the night sipping single malt and talking about fish. Eventually we got on to the topic of expensive fish and what the most expensive “commonly” kept aquarium fish is. A lot of different species and morphs where discussed and we sometimes had a hard time agreeing on what constitutes a common species. We both agreed that any one of fish should be excluded from any list of the most expensive fish species.

The discussion made for an pleasant night and in the end I decided that I should write an article about the species I think should be on the list. You might not agree with this list and if there is any species you think is missing from the list or any species that you do not think belong then I would love to discuss this with you in the comments below. Please let me know what I missed. I am well aware that no list like this is ever going to be complete. Prices go up and down and I do not know about all fish that enters the aquarium trade.

Below you will find a list of the 10 most expensive fish species in the world. The list only list species that are regularly available in the trade. There are plenty of other species that would be very expensive if you wanted one but that are normally not sold. Examples of this includes everything from Great white sharks to coelacanths .

The Asian Arowana (Scleropages formosus) is a fish that is very popular in Asia. The fish can grow to 3 ft in length and have long been popular due to that fact that it said to resemble a dragon when seen from above. It is believed to bring luck to its owner. The fish has been domesticated in a similar fashion to the Koi carp and there are a long row of different types and color morphs available on the market. The price can vary greatly between different types of Asian arowana and between different individual fish depending on their perceived quality. High quality large specimens can sell for very high prices and there are reports of sales in the $500 000 range. I have not been able to confirm any fish that has sold for this price.

The Asian arowana is unfortunately banned in the USA.

Peppermint Angelfish (Centropyge boylei) is a small and highly sought after angelfish that is found on large depths that make them hard to collect. They are found at 150 – 360 ft depth in the waters around Cook Islands and Rarotonga. Only a low number of these fish enter the aquarium trade. If you want one you will have to spend around $30 000.

Masked Angelfish (Genicanthus personatus) is another very expensive angelfish. This species hail from the waters around Hawaii and it is very rare in the trade. Hawaii has very strict rules surrounding the harvesting of marine species for the aquarium trade. The species is found in relatively shallow water as well in deep water, 70 – 570 ft. This species sells for around $20 000.

Bladefin Basslet (Jeboehlkia gladifer) is a very small species that sells for a very high price. They grow no larger than 1.5 inches/3cm long. If you want one of these you have to expect to pay $8 000 or more. It is expensive because it is very hard to harvest. It is found at close to 500 ft depths near Curacao. I personally love this species and hope some one is going to be able to breed it so that the price go down. Hopefully someone with deep pockets is working on breeding the species.

Golden Basslet (Liopropoma aberrans) is another stunning little basslet that cost $8 000 or more. It is a very small deeply yellow species. The species is sometimes confused with the Gold Assessor Basslet (Assessor flavissimus). Is is not the same species and the Gold Assessor Basslet is a lot more common and a lot cheaper. You can usually find this species for around $100.

The Neptune Grouper (Cephalopholis igarashiensis) is a deep water grouper that has a stunning yellow base and red and pink fields/stripes. It is a large fish that can grow to more then one foot long. The species is hard to harvest alive and only a very low number of fish enters the market. It is more common that you see it in a Japanese fish counter than alive in an aquarium. If you want one you will need to be patient to be able to find one and willing to pay $5-6000. Most fish are sold in Japan.

Australian Flathead Perch (Rainfordia opercularis) is a small species that is found on coral reefs of eastern Australia. It is very rare due to a small native range and due to the fact that is is very shy and elusive. The species often cost close to $3000 when it is found in the trade. This species have been breed in captivity by Todd Gardner (2017) and the price is bound to come down. This is one dream fish that you are likely to be able to own in a few years.

The lightning clown fish is a color morph of the maroon clown fish. A single specimen was wild caught and made its way into the trade. The fish was given to a person that was able to breed it and the morph was found out to produce fry with the same color mutation as the adult fish. The fish is easy to breed and is becoming more and more common in the trade. It used to be an unique fish, Today it is merely rare. In another 10 years i predict it to be a common color morph. The last specimen i saw for sale cost close to 3000 but the prices are likely to keep going down.

The clarion angelfish (Holacanthus clarionensis) is the third angelfish on this list. This is a dream fish for many due to the fact that it is very beautiful and due to the fact that it is expensive but still feel attainable. Like something you might be able to afford one day. Many other fish on this list are to rare or too expensive to even dream about. It is collected primarily of the cost of Mexico.

The German blue ram is a fantastic little fish.  It is a true gem that can be kept with other friendly species.

Comments Off on Fish of the day: German Blue Ram 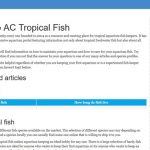 Welcome to the new AquaticCommunity.com.   The new layout is only available on selected pages and will be slowly rolled out as I am able to iron out bugs and other features.  Right now the only new page that is visible is the index page. I will update this page as i add the new layout to new sections.

I am doing it in baby steps since AC is a very large website and I do not want any mistakes to affect all pages.  It is better that the bugs can be discovered on a single affected page before I update more pages.

The new layout is very different from the old one and i know that some people will not like it.  The old layout do however work very poorly on mobile devices and we have to change with the times.  The version of the index page you can see right now is not the final version. It will develop over the coming weeks.  The main focus right now is to make sure that it loads fast and that it scales well on different devices.

The new layout is a little bit disappointing at the moment. But i am sure the end result will be great.

I usually aim high end up changing nothing.  This time i want to change one small thing after the other and hopefully bring AC into the modern era.