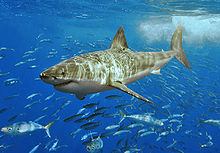 Who’s looking forward to Shark Week? Well in Brooklyn it’s going to be all year long!

The New York Aquarium has announced this past Tuesday that it will build a $125 million structure to become the home of a gigantic shark tank – giving them the means to give a home to five times as many sharks.

“The current shark tank exhibit is old and tiny, so we’re very excited to replace it,” commented Jon Dohlin, the New York Aquarium director, who is hoping to begin the project by 2012.

The Coney Island attraction’s new structure will be comprised of aluminum which glows in the dark which will be visible from W. Fifth to W. Eighth streets and be the first of the Aquarium’s seven sectors which you will be able to get into from the Boardwalk.

This new structure is planned to come to fruition by 2015, when seven different kinds of sharks will be served up to the public eye.

As recently as 2008, The Beep was badmouthing the Wildlife Conservation Society, which was in charge of the Aquarium and the zoos of the city, for supposedly not devoting enough funding to the shark house.

All that has changed now, and no one can complain about the $49 million in funding the project has received, however it still needs another $75 million to finish the project…