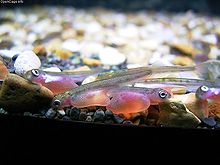 It appears that Alaskan wild Salmon are not only good at swimming up stream, but they can also swim against the current trends in the rocky waters of the global economy.

Even though there are many workers suffering hardship at this point in time, the commercial fishermen of the state are busy clinking their glasses, they just received the most money they have in eighteen years – a staggering $533.9 Million, according to rough calculations made by the state.

Generally speaking when harvests are at a high – at 169 milion salmon reeled in, this is one of the biggest harvests on record – the price of fish tends to drop. The whole “Supply and Demand” theory.

However, contrary to that theory, for a myriad of reasons, which include the problems facing the farmed-salmon industry, the prices of fish did not drop this 2010.

“This was the first year where I saw a good volume (of fish) and a good price at the same time,” commented a tickled pink Cordova gillnet fisherman who targets sockeye but harvests all five of Alaska’s salmon species, Kim Menster.

Ever since Menster became a gillnet fisherman back in 1998, the price of fish she has paid has doubled in terms of sockeye, and quadrupled for chum, she has roughly calculated.